The coastal area of Bangladesh has been devastated by Cyclone Amphan recently. Most of the drinking water sources have been flooded in that area. Till now people are suffering from drinking water crisis and shelter. There is water everywhere but is not drinkable. Thereon overflow of water into household makes them shelterless and some are using boat to survive. Also there is scarcity of water for household uses. People use salt and contaminated water for bathing and washing. The incidence of waterborne diseases has also increased. To solving this insufferable problem LEDARS started supplying drinking water to Amphan affected people in Shyamnagar and Assasuni Upazila under Satkhira District. On 23 May 2020, at Burigoalini Union of Shyamnagar Upazila the water supply program was inaugurated by Burigoalini Union Chairman Mr. Bhabatosh Kumar Mandal and on 28 May at Assasuni Upazila by Assasuni sadar union chairman Mr. S.M. Selim Reza Milon . From that day, everyday 10000 liter drinking water supply is being continued at Burigoalini Union and 5000 liter at Assasuni Upazila. And what more to purify the water 3000 halotabs and 150 packet saline are distributed on 7 june 2020 at Assasuni Upazila. Mr. Md. Mostafizur Rahman, Assistant Public Health Engineer of Asashuni Upazila was present on the occasion. 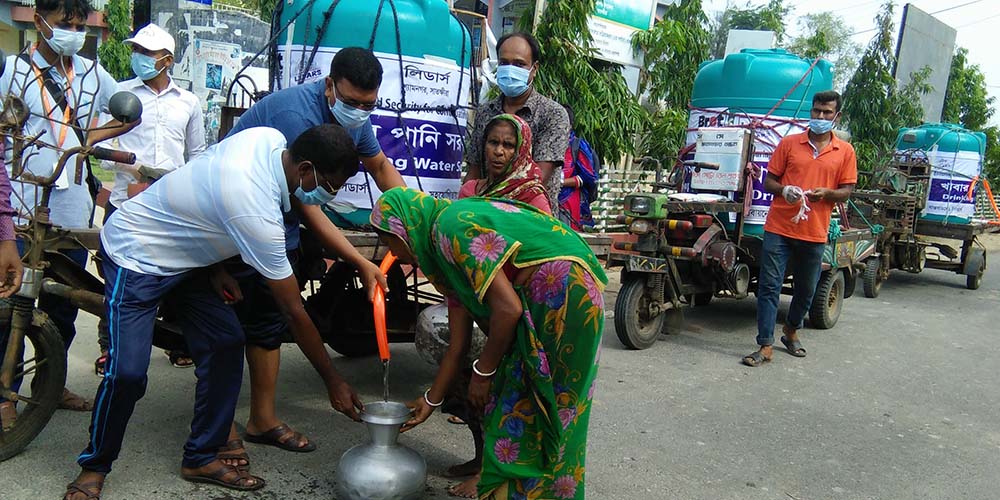