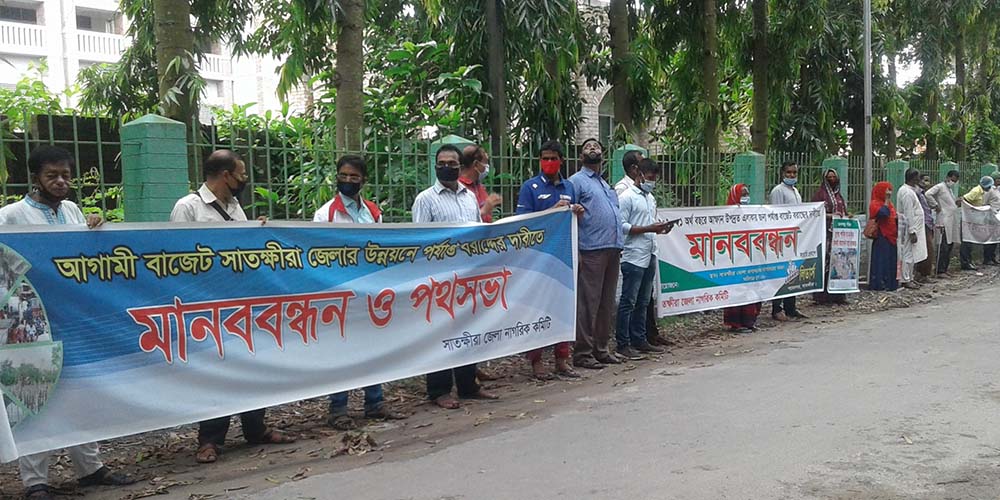 The Satkhira Zilla Nagorik Committee has given a memorandum to Honorable Prime Minister through Satkhira Deputy Commissioner with conducting a human chain on various demands including sustainable embankment on the coast. The memorandum was handed over at the Satkhira Collectorate premises on 9 June, 2020 after an hour-long human chain. Speakers of the human chain said that in the global coronavirus situation, the recent catastrophic cyclone Amphan hit the coastal areas of Bangladesh including Satkhira. Especially in different areas of Shyamnagar and Asashuni upazilas of Satkhira, embankments of Water Development Board have been broken and vast areas have been flooded. In such a miserable situation, on 2 June 2020 the Executive Committee of the National Economic Council (ECNEC) approved ‘Development of Drainage System of Polders 1, 2, 6-7 and 6-7 (Extension) of Satkhira District’ project with allocation of Tk 465 crore to alleviate waterlogging in Satkhira city and adjoining areas. The speakers thanked the Prime Minister and all concerned in the government for this. In the overall context, the speakers demanded the implementation of 21 points in the development of Satkhira district and the solution of various problems on an urgent basis. These demands include the need to rebuild permanent, strong and sustainable embankments; adequate space should be kept beside embankment. The embankment should also be stopped from being used as a perimeter embankment at the local site and trees should be planted between the embankment and the perimeter embankment. Concrete embankments have to be constructed through blocks by identifying the places where embankments are being broken repeatedly. If the Water Development Board does not have its own land for the construction of the embankments, the land has to be acquired with compensation. The embankments should be 100 feet below, 30 feet above and 30 feet high. Local government needs to be involved in the formation of emergency funds for embankments maintenance. All kinds of corruption must be stopped in the embankments construction project. The speakers further said that drinking water security of the coastal people has to be made sustainable. Md. Anisur Rahim, convener of the Zilla Nagorik committee, presided over the human chain. President of Satkhira Press Club Principal Abu Ahmed, former Principal Professor Abdul Hamid, Ed. Sheikh Azad Hossain Belal, Madhab Chandra Dutt, Principal Ashek-e-Elahi, Anwar Zahid Tapan, Muktijoddha Sangsad Sadar Upazila Commander Md. Hasanur Islam, CPB leader Comrade Abul Hossain, Jasder Papia Ahmed, Bangladesh Jasder lecturer Idris Ali, Basder Nityananda Sarkar, JSD Sudhanshu Shekhar Sarkar, Maqbool Hossain of Workers Party, President of Bangabandhu Professional Council Ed. Al Mahmoud Palash, General Secretary Ed. Prabir Mukherjee, Online Press Club President Munsur Rahman, journalist Raghunath Kha, Uttaran Ed. Monir Uddin, Mohan Kumar Mandal of Leaders, Moniruzzaman Joyaddar of Water Committee, Maryam Mannan of Chuparia Mahila Samiti, Siddiqur Rahman of Udichir, Tapan Kumar Shil, District Branch President of Bangladesh Technical College Teachers Association and others spoke in solidarity with the occasion. The meeting was chaired by Committee Member Secretary Ed. Abul Kalam Azad and Joint Member Secretary Ali Nur Khan Bablu.

Later on 15 June 2020, another human chain was conducted by Satkhira Zilla Nagorik Committee. After the human chain, the south-west coastal area including Satkhira was declared a disaster prone area, a separate authority was set up for the development of the area and various demands were made including adequate allocation to that authority and a memorandum containing the demands was handed over to the Prime Minister through the Deputy Commissioner. 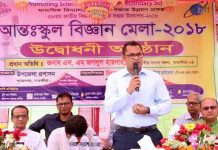 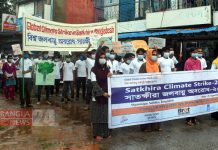